All the #Girlbosses out there know that it's always work before play.

Lala has made that known in her latest interview with Page Six. The actress says she is focusing on her son and career at the moment.

Also, guys out there that had plans to slide in her DMs should not bother. Rumors speculate that Lala and her husband Carmelo Anthony might be getting back together.

At Anthony's cover party for Latina Magazine, she sat down to discuss her current love life and endeavors.

"I'm trying to be a great parent to my son and that's where I'm putting all of my focus right now," Lala said.

When asked if other men have tried to pursue her while she and her husband have been separated, the Power star refused to answer.

Lala and Carmelo were together for 12 years and have been married for seven years before they decided to separate. The couple has one son together, Kiyan, who is now 10 years old.

In April 2017, news broke that the two had decided to take some time apart. However, they have made sure to remain consistent with co-parenting Kiyan.

"We are happy and will continue to do what's best for Kiyan," Lala shared.

When the mom isn't busy taking care of her son, she's making money moves with her denim collection that is currently available at Lord and Taylor stores.

On Friday, the designer took to Twitter to announce that she would be teaming up with Lord & Taylor to create a t-shirt for Puerto Rico. All of the proceeds will help raise money for those that have been affected by the Hurricane in Puerto Rico.

I teamed up with @lordandtaylor to create this t-shirt to raise money for the people of Puerto Rico. 100% of the proceeds to Unidos Por Puerto Rico hurricane relief. Our hearts go out to Puerto Rico! https://t.co/VJ7eB7YJCX pic.twitter.com/1knSflfOon

Lala also shared that working out has been the most therapeutic thing for her this year.

Also, earlier on Friday, the denim designer took to Twitter to share a picture of herself in a fitted black jumpsuit. Click on the photo below to see Lala's bangin' body! 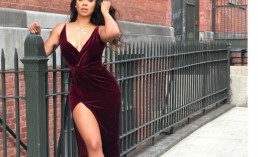 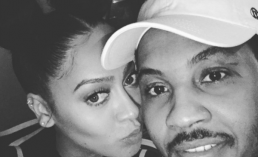 LaLa Husband Name: Will Carmelo Anthony's Move To OKC Save His Marriage? [VIDEO]