A very pregnant Cardi B has officially canceled her tour. The rapper, who confirmed her pregnancy early this month, announced the news Wednesday, April 25.

Cardi B Cancels Her Tour

Cardi B took to Instagram to announce that her performance at Washington D.C.’s Broccoli Fest this weekend would be the last time she will hit the stage “for a little while."

She added that her unborn child, whom she belovedly called "shorty," continues to get bigger inside of her, making it difficult for her to breathe. In true Cardi B fashion, she went on to joke that she could hardly breathe at that very moment. She told fans she had just finished eating six chicken wings and had a hard time catching her breath.

Her video came fresh off the rapper’s performance at Coachella. She was also slated to perform at a handful of music festivals through July.

Still, there is good news for fans who are waiting for her to kick off her tour with Bruno Mars. She confirmed during her guest co-hosting gig on The Tonight Show Starring Jimmy Fallon that she would still be doing the tour with Mars. She told viewers and fans that her newborn baby will be in tow.

She Wants It All

Despite canceling the tour, Cardi has been open about being a full-time mom and rap star. She responded to critics who said she wouldn’t be able to handle both demanding lifestyles.

As for the baby news, Cardi B confirmed her pregnancy during a performance on Saturday Night Live. While she kept quiet about the rumors that had been swirling for months, she is now open about her pregnancy.

During an appearance on The Ellen DeGeneres Show, she revealed that she and her future husband, rapper Offset of The Migos, have already chosen a name for the baby. She added that considering Offset came up with the idea for the baby name, she would let him announce it to their millions of fans. 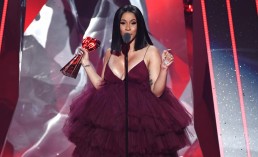