Jessica Simpson is mom-shamed following a video of her son doing a backflip. The singer was criticized for not taking proper care of her kid.

Having Some Good, Clean Fun

The trouble started when Simpson posted a clip of 5-year-old Ace Knute playing in the pool with his father, Eric Johnson.

The short video shows a happy little Ace getting a lift into a backflip from his father, and landing with a splash in the pool.

"A broken bone doesn't hold this kiddo down #waterproofcast #ACEKNUTE," Simpson captioned it.

The post came just a few days after the proud mama told her social media followers that the little guy had broken his arm.

As a result, commenters were quick to condemn Simpson for allowing her kid to engage in such dangerous rough-housing when he's, by her own admission, clearly injured

"I think any generation would not think it's a good idea to flip a child around like that with a broken arm lol ... that's just common sense," wrote one.

Another worried that the pressure could hurt the already broken arm, and advised, as a healthcare professional, that it wasn't a good idea.

"Wow, no wonder the kid has a broken arm," chimed in somebody else.

To be fair to Simpson, Ace is nowhere near the edge of the pool and clearly in no danger of hitting off the side. He also appears to be having a great time.

Everybody Needs To Calm Down

Thankfully, a huge number of commentators rushed to her defense, with one, in particular, countering the so-called healthcare professional's position by pointing out that modern casting and orthopedic technology has come a long way.

Another suggested the family's doctor was likely consulted before Ace went in the pool, considering that he's wearing a waterproof cast in the footage.

There was a general feeling that Simpson was right to let her kid have some fun while he's suffering from a broken arm because it will, hopefully, distract him.

The fashion designer and proud mother told fans via Instagram that her son had suffered his first broken bone, alongside a pic of him smiling happily for the camera.

Her caption adorably referred to how the little guy was breaking more than hearts. The fashion mogul also noted that she was more upset about it than he was, making the horseplay in the pool seem even more innocent. 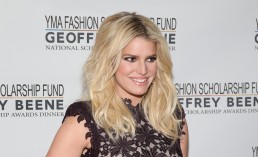