Many didn't believe at first that Dogecoin was going to be a cryptocurrency - after all, Elon Musk tweeted first about it on April Fool's Day.

But thanks to the billionaire, it immediately started to blow up. It has even become hottest than Bitcoin.

As of May 4, the total value of the dogecoins in circulation is nearly $50 billion. Currently, it is the fifth most valuable cryptocurrency on the market, as per CoinMarketCap.

Because of that, Redditor retoderfux (real name: Herr Fuchs Zurich) created an official song about the crypto titled "Dogecoin Song - To The Moon" and was also tweeted by Elon Musk on May 10.

SpaceX launching satellite Doge-1 to the moon next year

On Reddit, retoderfux expressed his excitement about the SpaceX CEO recognizing his song to his 53.8 million followers.

"The day Elon tweeted my Song," he wrote. 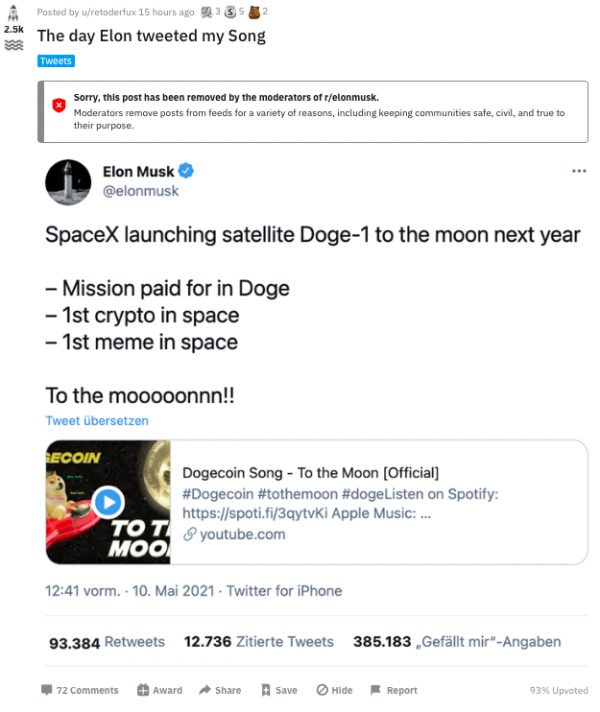 In the comments section, retoderfux said, "I can die in piece now" with other users commenting their RIP and condolences. 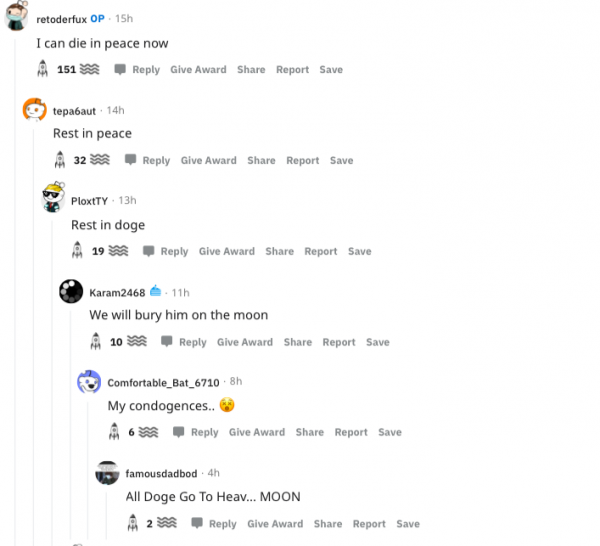 Perhaps retoderfux is a massive Elon Musk fan, as his posts on Reddit included a lot of Musk-related things.

in the last couple of days, he even created an anthem and animation about the billionaire.

The song is already available for streaming on YouTube, Spotify, and Apple Music.

It tells the listener that Dogecoin is the only cryptocurrency to be investing in as it is the "people's currency" so "you know it's best."

It also talks about planning to take Dogecoin "to the moon."

Elon Musk is also mentioned in the song, after "a broker" said that you can't get rich with Dogecoin.

"But even daddy Elon knows it's time to join."

Bitcoin is also out, according to the lyrics, as Dogecoin plans to become the top cryptocurrency.

The song also encourages the listener to hold on to their Dogecoin "and never sell" to become "Much rich" and continue to "buy more" as it will do well and go "such high."

Another meme mentioned in the song is the "Shut up and take my money" adding "This meme coin is looking funny."

Dogecoin plans to make history with its users and investors, even went as far as to say "In doge we trust."

Snoop Dog, of course, was mentioned in the song and a reference to his song was incorporated into the lyrics which said, "It's going up, don't drop it when it's hot hot hot."

Fans React To Elon Musk Tweeting About the Song

On Reddit, people have mixed reactions to Elon Musk tweeting about the song.

One Redditor suggested to the Dogecoin song creator that he "should NFT it for $10 million" as it is already considered as high art.

Some mentioned that Bitcoin has already had a lot of people backing it up, so it's also a matter of time for a famous billionaire like the Tesla CEO to start shouting it out as well.

"He knows how to raise money and use it as a resource. He admitted on SNL that dogecoin is really 'just a hustle'. So maybe at the end of the day, he just views it as an investment opportunity and nothing more."

Everyone knows it isn't a joke anymore after it was reported SpaceX is funding a Dogecoin-funded mission to the moon.

According to the Geometric Energy Corp, teaming up with Elon Musk's company, they will "send a 40-kg satellite to the moon on a Falcon 9 rocket in the first quarter of 2022."

It will be the first-ever commercial lunar payload paid entirely with Dogecoin.