In an interview with Kevan Kenny from Audacy, Counting Crows' lead singer and founding member Adam Duritz shared tidbits about their new music, his brief acting stint, and more.

Starting their cozy chat, Kenney asked the Counting Crows' lead if there was anything he passed on in the past that he now looks back with a bit of regret. Without much thought, the lead vocalist behind Shrek's "Accidentally in Love" responded how he "got so frustrated" with how Harvey Weinstein was treating actor Sean Penn on the set of "The Crossing Guard." He recalls his frustration leading to their song "Miller's Angels," a song specifically written for the 1995 movie and released the following year. 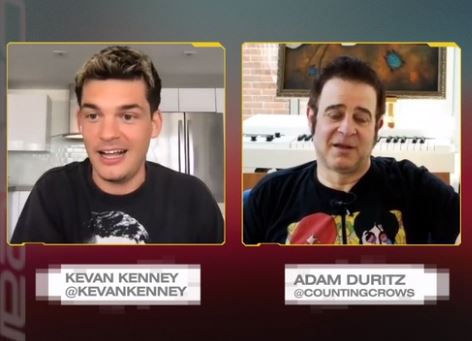 Additionally, Adam Duritz shares a particular episode from his past. Though he doesn't regret saying no to this offer, he finds it funny in hindsight. He shares in his recent Audacy interview that he almost starred in the 1997 action movie "Face/ Off," which starred Nicolas Cage and John Travolta as a terrorist and an FBI agent, respectively, who had their faces switched.

"After our first or second album, me as a character was really in people's minds," the Counting Crows' lead told Kevan. He then continued to explain how he was asked to audition for the role of Pollux Troy, though director John Woo ended up with actor-producer Alessandro Nivola.

"[But] it'd been like me and [Nicolas] Cage instead, because it's like the Robin to his Batman in that movie," Duritz added. He then shared his story with Audacy, how he was an actor in his younger days and how he didn't "wanna be told what to do," which he liked with being in music. While he says he doesn't want to go back to acting at the time, he found the "Face/ Off" offer "really tempting for a second because it was really flattering."

Concluding his tale, he reveals not regretting the moment he turned down the role. "I don't think I would've been very good," Duritz said in his Audacy interview.

Originally formed in 1991, the band is currently composed of Adam Duritz on lead vocals, Jim Bogios on drums, Dravid Bryson, Dan Vickrey and David Immergluck on guitars, Millard Powers on bass, and Charlie Gillingham on keyboards. The Berkley, California rock band entered mainstream music shortly after their 1993 debut album, "August and Everything After," which featured their breakthrough hit "Mr. Jones.

Aside from their Grammy nominations, the band also received an Oscar nomination for their 2004 song "Accidentally in Love," one of the songs in the Shrek 2 official soundtrack. Since their debut, Counting Crows has released a total of eight studio albums, the latest being "Butter Miracle." Its first half, "Butter Miracle, Suite One," was released last May 21. It will form the complete album with the second part, "Butter Miracle, Suite Two," set for a future release. Adam Duritz gets songwriting credits for the four tracks in the Suite One.

RELATED ARTICLE: P!nk Shares Details on Her New Documentary, "All I Know So Far," in New Interview

Tags: audacy RADIO.com counting crows celebrity interview
© 2021 EnStars.com All rights reserved. Do not reproduce without permission.
Most Popular
You May Also Like

Could this finally be the year he brings home the prize? Country superstar, Dierks Bentley, is a lot of things, but one thing he isn’t is a sore loser! His nomination for 2021 CMA Male Vocalist of the Year at this year’s 55th Annual CMA Awards marks Bentley’s tenth time being nominated, but he’s never won.

Country legend Billy Ray Cyrus and Australian singer-songwriter FIREROSE caught up with Mornings With Christine & Salt on Audacy, promoting their new collab "New Day," and sharing fun stories in between.

Lizzo Opens Up on Exhaustion, Social Media, and how Cardi B Got Her Back

Lizzo is back again at the top as her latest single, "Rumors" feat. Cardi B. is currently the top rap track in the country - and she shares a lot of stories behind the new banger, in an interview with Audacy.

As the Aretha Franklin biopic "Respect" continues to pick up steam and praise worldwide, Jennifer Hudson admitted waiting for the dream role for fifteen long years.

Together with the release of her latest track "PSYCHO," multimedia icon Dixie D'Amelio caught up with Audacy host Julia in the latest Check In episode.