Prince Harry and Meghan Markle might not be a married couple yet, but that doesn't mean they won't be celebrating the most romantic holiday before their wedding. On Tuesday, the Kensington Palace announced that the soon-to be royal couple would be spending Valentine's Day eve in Scotland. This will be their first joint visit to the state.

The two will start the day by visiting the Esplanade in front of the famous Edinburgh Castle, where they will be greeted by the Royal Marines Scotland Band. Following their visit, they will watch the firing of the One O'Clock Gun, a tradition that began in 1861.

Watching a gun firing would make anyone hungry, which is why the pair will then head to the Social Bite, a sandwich shop that donates to social causes such as homelessness.

They will complete their trip by attending a reception at the Palace of Holyroodhouse, where they will celebrate the accomplishments of the country's youth for Scotland's Year of Young People 2018. The organization gives to people between the ages of 8 to 26 years old a platform to voice out their opinions and showcase their talents.

While Kensington Palace did not confirm whether Prince Harry and Markle would actually spend Valentine's Day in Edinburgh, sources believe that Harry definitely has something special planned for his future bride.

It's safe to say that Harry knows the way to the actress's heart, because she posted several photos of bouquets of her favorite flowers before deactivating her Instagram.

Markle has made it known that she is a big fan of the holiday and has always encouraged others to celebrate Valentine's Day even if they are single.

"I think you need to cook that beautiful dinner even when it's just you, wear your favorite outfit, buy yourself some flowers and celebrate the self-love that often gets muddled when we focus on what we don't have," Markle wrote.

Markle's joint trip with Harry to Scotland won't be the first time the 36-year-old traveled for the holiday. In a post on The Tig in 2016, she revealed that she would be spending V-Day with her friends in the West Village in New York City.

As previously reported, Harry and Markle will tie the knot on May 19 at the St. George's Chapel at the Windsor Castle. 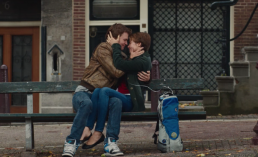 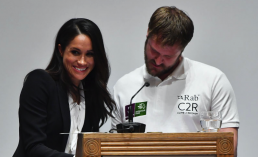 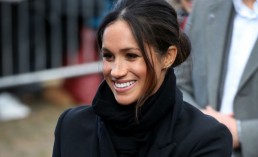