French Montana has weighed in on the current scandal involving his ex-girlfriend, Khloe Kardashian, and her new boyfriend, Tristan Thompson, who was caught allegedly cheating on the reality star over the weekend in New York City.

While Thompson and Kardashian have yet to comment on the scandal publicly, the rapper gave a more positive response to the messy situation.

The rapper was spotted in Los Angeles outside of the Poppy nightclub when he was approached by reporters who asked for his thoughts on the Thompson scandal. The hip-hop artist had nothing but positive words and wished his ex-girlfriend well and hoped the best for her.

"Lemme tell you something man, I just want everyone to be happy. When there's negativity, I duck and move Papi. We're doing good, we're wealthy, we're living healthy," he stated.

The rapper then ended his uplifting comments by singing Al Green's "Love And Happiness" before entering the club.

The former couple dated back in 2014.

The Keeping Up with the Kardashians star has always been vocal about wanting to start her own family and finding love. The reality star began dating Thompson in the beginning of 2017. The couple's relationship was highly scrutinized by the media due to Thompson allegedly leaving his pregnant girlfriend, Jordan Craig, to be with Kardashian.

The couple announced Kardashian's pregnancy in December 2017 via Instagram.

My greatest dream realized! We are having a baby! I had been waiting and wondering but God had a plan all along. He knew what He was doing. I simply had to trust in Him and be patient. I still at times can't believe that our love created life! Tristan, thank you for loving me the way that you do! Thank you for treating me like a Queen! Thank you for making me feel beautiful at all stages! Tristan, most of all, Thank you for making me a MOMMY!!! You have made this experience even more magical than I could have envisioned! I am so thankful, excited, nervous, eager, overjoyed and scared all in one! But it's the best bundle of feelings I've ever felt in my life! ️️️ A post shared by Khloé (@khloekardashian) on Dec 20, 2017 at 2:41pm PST

On the season finale of KUWTK, the reality star learned that she would be having a baby girl. Days before the arrival of their first child together, Thompson was caught on camera kissing another woman at a club.

Another video surfaced of Thompson kissing another unknown woman in October 2017.

The couple's daughter arrived on April 12, 2018 at a hospital outside of Cleveland, Ohio. 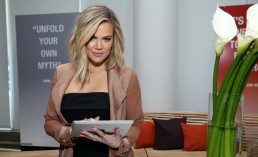