Jersey Shore personality Ronnie Ortiz-Magro and girlfriend Jen Harley are taking their issues public with a nasty spat on their social media pages.

The couple just welcomed a baby daughter together, Ariana Sky, but it seems they're past the blissful stage now.

According to a report from E! News, it was Magro, 32, who first showed signs of a quarrel when he took to Instagram Stories on Sunday afternoon.

"Note to self, can't turn a natural born H*E, into a HOUSEWIFE, if you find them in the gutter then leave them in the gutter," he wrote furiously on the social media website. "Not all people can be saved when they are so far gone. All you can say you did ur best and keep it moving! #facts #yeahhhhhhbuddy"

Harlay, on the other hand, isn't letting her baby daddy get the only word as she also used her Instagram Stories to fire back at Magro.

"Can't turn a coke head into a father," she wrote, mockingly adding the "Yeah buddy" at the end of her post.

In his next rant on Instagram Stories, Magro revealed why he's flying into a rage against his girlfriend, who apparently keeps intimate videos of her ex-boyfriend in her possession.

"If your significant other keeps sex videos of their ex, shouldn't they show enough respect to delete them, esp after being in a new relationship for over a year?" Magro wrote on Instagram Stories with the survey feature offering the options yes and no. "#GiveMeYourThoughts."

Later, his partner dropped a screengrab of a conversation between the two of them with Magro telling her to "pls take it down."

"U wanna block me and tarnish my name bc u got caught," he continues, adding threateningly to send a video to Harley's son and grandmother.

"What kind of man says this sh*t," Harley wrote on Instagram stories. "He's going to send videos of me to my 11-year-old son!!"

It's not the first hint that Magro and Harley's relationship is going south, even with a newborn.

In the latest Jersey Shore: Family Vacation episode, Magro brought another woman home from the club and locked himself in the bathroom with her, not emerging until his housemates banged on the door.

When he heard the knock, he says he was reminded that what he's doing isn't a good move given his relationship with then-pregnant girlfriend Harley.

"It felt so good though," Magro admits, E! News reports. "It's hard having a kid on the way and being with someone you're not sure you should be with."

In the same episode, he says he's still in love with ex-girlfriend Sammi "Sweetheart" Giancola despite his current relationship.

However, his eight-year relationship with Giancola is also marred with infidelity. Magro has previously admitted to cheating on the Jersey Shore star when they were together, according to People. 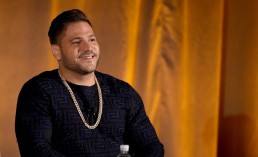 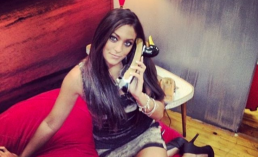 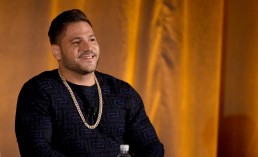