Following an explosive intro from Ryan Mitchell for the latest Audacy Check In episode. Speaking for most the generation who grew up with her work, Mitchell described Demi as a "childhood icon," adding that she's also now a queer icon. The two began discussing Demi's new project, the podcast "4D with Demi Lovato," telling Audacy that "podcasting seems to be the cool new thing." 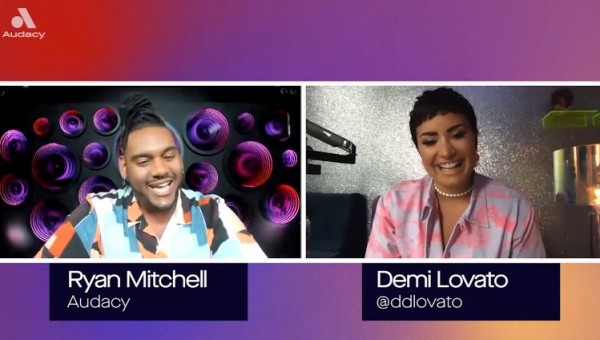 "I thought, what is a cool way that I could continue my self-exploration and this journey of self-development?" Demi Lovato adds. Arriving at the idea of doing a podcast as the next step in their evolution, they noted that there still has to be an element that would make 4D stand apart from all the other podcasts currently available.

Demi Lovato additionally explains that in her new podcast series, its content centers around conversations that aim to make the world a better place. She looks to spark healthy exchanges that raise awareness on topics that she thinks "maybe people aren't talking enough about right now or it's my ultimate mission, which is to have conversations that elevate humanity into the next dimension, that is what 4D is all about."

While fans might've been used to seeing Demi Lovato being the subject of interviews, this time she'll be the one leading the conversation. She excitedly shares that so far, it has been a great learning experience for her and that a podcast allowed them to create a space for these profound and intimate conversations.

4D with Demi Lovato perfectly falls in line with her efforts to educate people on the political and social issues of the time. She explains that "going forward I want to have conversations where people can see my face, they can hear my voice, and they can see that I'm still learning as well as the rest of the world." She then acknowledges that she's not an expert on a lot of things, but she's willing to always learn, noting the Bigg Chill "froyo incident," where she previously called out the frozen yogurt (froyo) shop, tagging them as "diet vultures."

As transparency has been an important key in the "Dancing With The Devil" artist's career, she expressed gratitude with the support system that backed her in facing all of her challenges. One of the most important moments of Demi Lovato being honest with everyone else was when she came out as non-binary. She explains in her latest Audacy appearance that since she learned more about gender identity and being gender non-conforming, she has taken the time to explore what feels right for her.

"I'm still, every day, stepping more and more into the identity that feels right to me, which is my pronouns being 'they/them,'" Demi explains.

See the full Audacy Check In interview with Demi Lovato below:

Tags: Demi Lovato audacy podcast gender equality
© 2022 EnStars.com All rights reserved. Do not reproduce without permission.
Most Popular
You May Also Like

Mark our words, 2022 is going to be the year of the buzz cut. Demi Lovato is doing it, Saweetie is doing it...Jada Pinkett Smith is just ahead of the trend at this point.

Here's How To Vote For The People's Choice Awards, Including The New 'Pop Special of 2021' Category

After the year we had, we can have one more category to vote for at the People's Choice Awards. As a treat. But start voiting now, because polling is only open until November 17.

Demi Lovato Questioned By Neil deGrasse Tyson Over 'Alien' Remarks; 'I Don't Get It'

Happy birthday, Demi Lovato! But is it really a "happy" one?

Demi Lovato and Noah Cyrus' friendship have finally bloomed into something more.

Demi Lovato and Noah Cyrus were recently spotted holding hands together in a theme park which added more speculation that the two might be dating, how did it started?

Lizzo had been out and about in Los Angeles, catching the attention of nearby paparazzi because of her choice of outfit, which has the one and only singer Demi Lovato.

Demi Lovato is under fire after they appeared to be holding a microphone with a soda brand logo that says 'zero sugar'. This came after the singer shamed a yogurt shop for selling sugar-free items that triggered them.