The release of one of the year's highly anticipated films, Justice League, is just around the corner and fans have been waiting to see DC's version of The Avengers ever since it was officially announced.

The Zack Snyder-directed film will unite the DC characters Batman, Superman, and Wonder Woman. Plus newcomers Aquaman, The Flash, and Cyborg as they take on Steppenwolf and his army of Parademons Here are some more updates on the upcoming film:

DC and Warner Bros. announced that Game of Thrones star Jason Mamoa would be playing the role of Arthur Curry a.k.a. Aquaman three years ago and intended to introduce him to DC's extended universe (DCEU) through Batman v Superman: Dawn of Justice, in which we already saw Batman (Ben Affleck), Superman (Henry Cavill) and Wonder Woman (Gal Gadot) team-up against Lex Luthor (Jesse Eisenberg) and Doomsday.

Although Aquaman and fellow metahumans, the Flash (Ezra Miller) and Cyborg (Ray Fisher), didn't fit into the plot of the 2016 follow-up to Man of Steel, the filmmakers did give fans a preview of the upcoming versions of what to expect in the upcoming film.

As far as standalone films are concerned, we already know that Aquaman is slated to hit theaters next year. Here's what Miller and Fisher had to say about their solo projects.

"There's a lot in development for sure," Fisher told the Los Angeles Times. "I think after people see Ezra's performance they'll be banging down the door for a Flash film."

"I think there's going to be a huge demand for Cyborg's film as well because of the emotional gravity this brings," Miller added. "Ray brings this level of artistry to this role that's so exciting. Look, we never know anything. To be perfectly honest with you, they keep us in the dark."

There's no denying that the Justice League cast members are absolutely slaying it with their respective costumes, but getting into the outfits was not as easy as one would imagine.

In new promo for the film, rightly titled Suiting Up, the film's cast discusses the problems each one faced with their costumes while filming the movie.

While Affleck's found Batman's new tactical suit with goggles suffocating, Mamoa had to walk around in a forty-pound suit of armor and Fisher had it rather easy as he had to shoot his motion-capture scenes wearing pajamas. "At least you were covered Gadot," quips in the featurette. Check out the clip below:

While a Justice League sequel has not yet been confirmed, the film's cast has already picked which DC character they want to join the league — and it's a female.

Cavill believes Supergirl would be a good addition to the team as he says it would be nice to have some family around. Affleck chose Black Canary as an ideal teammate stating that the team "could use more women." Miller went for a female Green Lantern and Ray Fisher thought the magician Zatanna would be an excellent addition, and her powers could open up a world of possibilities for the DCEU.

Batman And Wonder Woman To Romance Each Other?

Affleck recently revealed that the reshoots by Joss Whedon introduced a new romantic angle between The Dark Knight and the Princess of Themyscira.

In an interview with Entertainment Weekly, Affleck said that Whedon's scenes allowed Batman to "play the dynamics, the sexual tension with Wonder Woman," among other things. Wonder Woman and Batman, who are reportedly getting their own team-up comic book series, have shared a kiss in the comic books but decided not to go ahead with their relationship and risk their friendship

We also saw a glimpse of a romance between the two characters in the Metal tie-in, Batman: The Merciless, in which an alternate Earth's version of Bruce Wayne falls in love with Wonder Woman before she was presumed dead, but then loses his mind after becoming the new god of war and was actually responsible for her ultimate death when it was revealed that she was still alive. 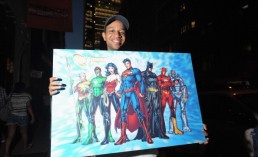